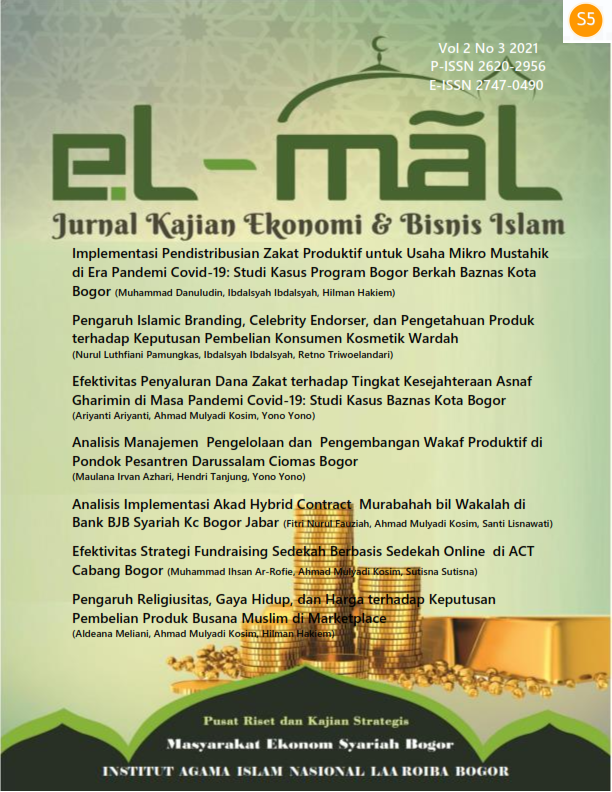 
Alms is a gift given by someone in the form of property or non-treasury with the aim of expecting the pleasure of Allah SWT. Indonesia is a country with a relatively high percentage of poor people. As a country with a majority Muslim population, the potential for alms is very large. Alms in large amounts can be an alternative instrument in reducing poverty in Indonesia. One of the humanitarian agencies that collects alms funds is Aksi Cepat Tanggap (ACT) Bogor branch. The development of technology and information has made it easier for ACT to develop an online-based alms fundraising strategy. The purpose of this study was to determine the effectiveness of online alms fundraising at ACT Bogor branch. The research method used is qualitative descriptive with data collection techniques of observation, interviews and documentation. The results showed that in 2020 ACT Bogor branch was not effective in terms of effectiveness ratio because it was only able to raise funds of Rp. 4,448,517,958 with the target set by the institution of IDR 7,000,000,000,000. This is because the target set by the institution is very high, even though the collection of funds is quite large. Progressive results can be said to be effective because online-based alms fundraising is very optimal during a pandemic when compared to direct fundraising because it is constrained by restrictions on community activities by the government during the pandemic. The online alms fundraising mechanism is considered easier and very supportive during the COVID-19 pandemic. With the online-based alms fundraising, it is hoped that ACT branches will be able to increase the collection of alms funds from donors and in the future, ACT Bogor Branch will have its own application specifically made to collect alms-based alms online so that the obstacles that often occur can be minimized.

This work is licensed under a Creative Commons Attribution-NonCommercial-ShareAlike 4.0 International License.